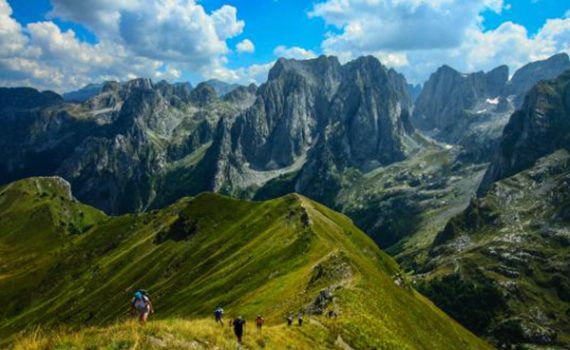 In the east side of Delvina, Saranda region, there is a hidden place with a very intriguing name and very old history. It is called Xhemerhalla.

To go there, you will climb to the hill, where are the ruins of the old castle of the city Delvina. Then you go down to the other side of the hill and you will find yourself in Xhemerhalle, also known as the place of jewellery.

Where this name come from? And what is the story behind this place? Walking to an old stone-path you arrive to a cold Spring which is called the “Tap Water of Xhemerhalla” (or Cezma e Xhemerhalles) which was a very important object in the center of that old city during XVI century. During that time, the life of all residents was concentrated around the three-nom of objects: the Mosque, the bakery and the tap water which means cleaning and hygiene. This was the richest part of the city that time, and that is why it is called the ‘jewellery neighbourhood’. The name Xhemerhalle comes from Arabic, which means jewellery and souvenirs.

The Islam complex of Xhemerhalla is dating back to 1682 and has three parts: The Xhemerhalla neighbourhood; the unique and the only one hamam of this type in Albania; and the first Mosque build in Albania, known as the Mosque-the King

In the same place you can visit The Castle of the city, and the Mosque of Gjin Aleksi, which is very impressive building, situated in Rusan in the entrance of Delvina. This mosque is a rare combination of three religions- it is a mosque built up on the ruins of Byzantin Church, surrounded by 4 shrines. It is a cult place for three religions and is a holy place for all citizens.

It is a small medieval castle. It was occupied by venetians and then by the Sulejman sultan who came this area with the aim to occupy Corfu. He appointed Ajaz Pasha, a Albanian to govern the occupied Delvina. The castle is pentagonal, built with stones in the top of a rock. The castle is small, but is very beautiful. Its perimeter is 600 steps. In the east side it has an Iron Gate. Inside the castle there are only three houses. In addition inside the castle there is a Mosque, a depot for the food, ammunition and for the water. Anyway it is very small Castle comparing to the other castles in the country. For all the lovers of old buildings and nature, this is a fantastic place to visit.