Waters of Albania are filled with artifacts 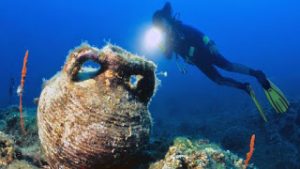 The unexplored waters of Albania are filled with artifacts

The undersea treasures of Albania were the focus of an article of the famous British media on line www.thetimes.co.uk
The journalists were here on a mission to explore the underwater treasures in order and to raise awareness to save one of Europe’s last secret underwater treasure troves before it is plundered.
The underwater world here combines Albania’s recent isolationist past with its ancient history..
“It’s incredible what’s down there,” said Mateusz Polakowski, 29, an underwater archaeologist at Southampton University. “We don’t even know about a tiny fraction of it.” He is part of a team of archaeologists and technicians working feverishly to map out Albania’s underwater riches unexplored for decades because the country was ruled for four decades by the dictator Enver Hoxha.
Enver Hoxha, whose communist forces seized power in 1945, ran Albania as a hermit kingdom, the most repressive and ideologically driven regime in Europe. It was the North Korea of its day. Its coastline is less than two miles from the beaches of Corfu, but it might as well have been on the moon.
Thanks to the diving ban, however, the waters off its coast are an archaeological time capsule, unrivaled across the Adriatic and the Mediterranean.
Underwater heritage experts hope Albania will avoid the fate of Greece and Italy, whose historical richness have been pillaged by treasure-hunting divers. Further north in the Adriatic, in the seas off the former Yugoslavia, armies of looters have used scuba apparatus to plunder artefacts from beneath the waves.
In the Bay of Vlore, on Albania’s southern coast, where the Hercules was last week searching for shipwrecks, the waters ran red when Caesar clashed with Pompey’s forces during the Great Roman Civil War of the 1st century BC.
When the Ottoman Empire was threatening Italy during the reign of Suleiman the Magnificent, its fleet gathered in the bay. Jews expelled from Spain during the late Middle Ages escaped to Vlore via Italy. All have left their imprints on the sea bed.
“We’re trying to find this little guy,” said Polakowski. Leaning back in his chair, he pointed at a map of the sea floor, marked with a green line showing the location of a wreck from about the 1st century BC. “We can identify the age by the type of amphora it carries. This one would have been carrying things like olive oil or wine.”
This search of Albania’s waters has been going on unheralded for the past decade.
A day’s sail away from this shipwreck lies Butrint, which, according to the Roman poet Virgil, was founded by refugees from ancient Troy, who escaped the sacking of their city more than 3,000 years ago.
In the modern era, the Albanian coast was an important supply line during both world wars.
“It’s like looking under the ocean with a flashlight,” said Polakowski. “It’s so vast. We’ve still only surveyed less than 1% of the area. You can swim a site 10 times and you can still be 10 metres off a shipwreck and miss it.”


Scuba diving is technically still not permitted, but three years ago the Albanian Council of Ministers allowed recreational diving in defined areas along the coast.

Now treasure-hunters from Italy and Austria have been seen in Albanian waters, as well as enterprising locals equipped with scuba equipment and a desire to make fast cash.